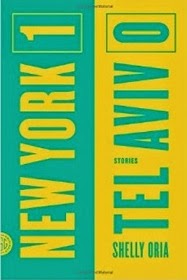 The short stories in New York 1, Tel Aviv 0 by Shelly Oria, are unconventional in structure and in the relationships they portray.

The first impression you get while reading this collection is that the format is different from what you're accustomed to seeing in fiction. Stories are fragmented into moments and episodes, marked in separation by numbers, calendar dates, or even by how many times the characters have kissed. Dialogue is included, but built into the paragraphs, without the familiar presence of quotation marks to guide you during the conversations. Yet, the pieces fit together into a cohesive whole, making the stories extremely readable despite their avant-garde construction.

Just like the unconventional structural format of the stories, the relationships of the characters are also a bit unusual. Same-sex marriages, threesomes, prostitutes, estranged fathers, the elderly, and couples who can stop time—offbeat individuals, yet recognizably human. "A new relationship is nobody's business," says the widow Yolanda in the story "None the Wiser". Such a relationship "needs the attention of the people who are in it, not the people around it." The reader is drawn into the intimate lives of the lonely, occasionally fragile people that appear on these pages.

I was attracted to this book by its title, which comes from the opening story about a threesome—two Israelis and an American—who live in New York. The Israelis have an ongoing competition, comparing Tel Aviv with their new home. When you come from a bar in Tel Aviv, "you head straight to the shower and turn the faucet all the way to red until the small room fills with steam" to wash away all traces of cigarette smoke. In New York City, in comparison, one is "indebted to the non-yellow walls, the guarantee of nicotine-free air once you walk into a room." The water may turn gray in New York when you wash your clothes, but the score is now New York 1, Tel Aviv 0.

Although the majority of stories in this collection are set in America, traces of Israel can be found in many places. "I'm Israeli, aggressive by nature," announces a photographer in the story "Phonetic Masterpieces of Absurdity". Her name is Mia, formed by the initials, in Hebrew, of the Yom Kippur War in which her father was killed during her mother's pregnancy.

In the story, "This Way I Don't Have to Be", an Israeli working as a grief counselor in New York makes frequent trips home. "Every visit takes a few weeks to shake off, and this one isn't any different; skipping back and forth between my two worlds feels like some maniac kid keeps pushing Reset on a computer that controls my behavior," she thinks. Coming back from Tel Aviv, where free grief counseling "guarantees long lines of eager Israelis," she finds herself "more aggressive, more impatient" with her clients.

The grief counselor again compares New York with her former home. "There is rage and rudeness in Israel, but they move about confidently, knowing nothing is ever going to change," she thinks. "In New York, people run and run and run, because change is absolutely possible, if only they run fast enough to catch it."

Possibly my favorite story in the book is also one of its shortest. "When the sun comes down on Tel Aviv, it comes down hard," is the opening of "Tzfirah", the name of "the siren that reminds people to remember." In just three pages the unnamed protagonist manages to explain a unique, Israeli experience. "This is how a nation achieves collective remembrance: it freezes to the sound of a wailing siren for the duration of one minute, or two." Turning on the radio, "you hear nothing but the soundtrack of grief."

This experience is unlike anything in America. Perhaps with the inclusion of this short, short story, the score has changed and can be recalculated to: Tel Aviv 1, New York 1.

New York 1, Tel Aviv 0 by Shelly Oria was published by FSG Originals (November 2014). The author was born in Los Angeles and grew up in Israel. Her fiction has appeared in The Paris Review, McSweeney's, fivechapters, and Quarterly West. She has won a number of awards, including the Indiana Review Fiction Prize. She curates the series Sweet! Actors Reading Writers in the East Village, has a private practice as a creativity coach, and teaches fiction at Pratt Institute, where she also co-directs the Writers' Forum.