Not supposed to happen in America 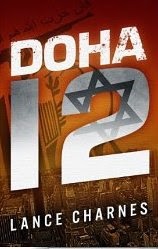 Hezbollah and Mossad agents battle it out on the streets of America in Doha 12, a novel inspired by the 2010 assassination in Dubai of Hamas commander Mahmoud Al-Mabhouh.

This time, Hezbollah terrorist Masoud Talhami has been murdered in Doha, Qatar. Twelve people are suspected of involvement in the hit. Their identities are known, yet, the names appearing on their passports actually belong to innocent people. Now Hezbollah seeks revenge for what it assumes to be a Mossad operation.

"If these people let Mossad use their identities, they're part of the same gang," charges Fadi Alayan, leader of the Hezbollah hit team.

One by one, the innocent included among the Doha 12 fall victim to very strange, tragic accidents. Soon there are only a few Americans left. Jake Eldar is a bookstore manager in Brooklyn and Miriam Schaffer is employed as a legal secretary in Philadelphia. United when they realize their lives are endangered, Jake and Miriam can't convince the police that the plot against them is real.

In what develops into breathtaking cat and mouse pursuit, Mossad agents chase Hezbollah operatives across the American urban landscape. "Mossad isn't supposed to operate in America," notes one, but nobody is following the rules. Telling the FBI that "a Hezbollah direct-action team is going to start killing American citizens because we used their names" is "crazy" says another.

Doha 12 (Wombat Group, January 2013) by Lance Charnes is an action-packed thriller in which one exciting climax follows another. Firefights shoot up crowded train stations, cemeteries, and even Temple Emanu-El in New York City. Agents may wear bullet-proof vests, but no one can escape injury in a powerful battle in which it is difficult to determine which side is good and which is evil.

The Mossad leans "heavily on its sayanim, the civilians who helped it around the world," writes the author. "It was the only way an organization with a mere 1200 members could maintain a global reach." The Israelis portrayed in the book ring true; everyone has a personal tragedy in his or her past, a reason to avenge Hezbollah terror.

Lead characters Jake and Miriam, drawn together by absurd, violent circumstances, are "two people screwed by the system, first in Israel, now in their adopted home." They swiftly realize that the only way they can stay alive is by personally fighting back against impending terror. It's a bit of a stretch to see how the two transform themselves into badass "I can save the world" heroes, yet as readers, we certainly understand their motives. Will Jake and Miriam succeed in escaping Hezbollah's revenge, or will they be the last of the Doha 12 to lose their lives as the thriller reaches its explosive conclusion?

Lance Charnes has been an Air Force intelligence officer, information technology manager, computer-game artist, set designer, Jeopardy! contestant, and is now an emergency management specialist. He has training in architectural rendering, terrorist incident response and maritime archaeology, although not all at the same time. Doha 12 is his first novel.