The Brave New World of The Circle 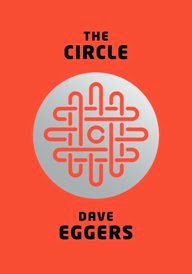 It's a bit embarrassing to admit, but every day I check how many new followers I have on Twitter; how many Likes my Facebook posts received; and how many pageviews were registered on my blog. I'm not obsessed with being successful on social media, but the more re-tweets, the better. For me, this is just part of my efforts to build my platform as an author.

But imagine, if you will, a world where increasing one's following is more important than anything else. And imagine that in that world, success is measured by the number of Likes, Comments, Tweets, and Favorites you have received. In such a world, all social platforms are combined under one roof. One roof, one circle.

This vision of an all-encompassing social media platform is the future depicted in the novelThe Circle by Dave Eggers (Knopf, October 2013).

When Mae Holland, a recent college graduate, lands a job at The Circle, she thinks her future is secure. She starts out in Customer Experience (CE), the firm's customer service department. In her job handling client inquiries, receiving a positive rating for each problem solved is the ultimate goal. Handling as many service tickets as possible, is also essential. And interacting with one's colleagues, and with their social media presence, is just as important.

Mae swiftly climbs the company ladder, even as The Circle continues to develop new technologies, some of them far-fetched but not entirely inconceivable. SeeChange is a network of light, portable cameras that provide real-time video from everywhere, monitoring our lives in a Big Brother sort of way. Hang a SeeChange camera around your neck and everything you do is shared with everyone else.

The walls of privacy and individual freedom are easily broken. There are no secrets; your life is transparent. As Mae states, "Sharing is caring," and "Privacy is theft." We realize that the world controlled by The Circle, is quite a scary place to live. The utopia of The Circle's campus is deceptive and dangerous.

Intentionally simplistic in places and making huge assumptions about the lemming-like nature of human beings, The Circle comes across like a modern, wired on steroids version of George Orwell's Nineteen Eighty-Four and Aldous Huxley's Brave New World.

Is this the direction we're heading, when we are judged for the amount of social interaction we conduct on the Internet? Will our online presence one day be more important than what we do in real life?

These are the questions raised in The Circle, a novel that makes you think about the possible consequences of the time we spend liking and tweeting. It is a fascinating read, one that signals a clear warning sign against the dangers of the brave new world that technology has delivered into our lives.

Dave Eggers is an American writer, editor, and publisher. His books include the best-selling memoir A Heartbreaking Work of Staggering Genius, and Zeitoun, the nonfiction account of a Syrian-American who rides out Hurricane Katarina in his New Orleans home.

Buy The Circle and read it now!