Touring the Dark Side of Tel Aviv 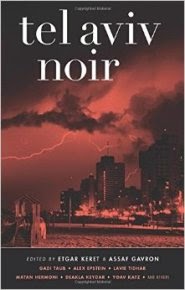 A former police officer escorts visitors to the riverbank where a murdered girl was found in a suitcase; the building where an infamous rapist was caught; and a strip club where a former cop regularly performs in the nude. In "The Tour Guide", a short story by Yoav Katz, the bourgeois Israelis eager to see the grimier side of Tel Aviv are people with full-time jobs, children, and a bit of free time. They are looking for thrills and are willing to be shocked that such crimes take place in Israel. "Fear and sanctimoniousness are a profitable combination"; the tours attract large crowds.

Readers of Tel Aviv Noir, Akashic Books (September, 2014) will feel that they have joined one of these tours. The short stories included in this anthology explore prostitution, drugs, alcohol abuse, gambling, and murder. Like the rest of the series launched in 2004 with Brooklyn Noir, each of the stories here is set in a distinct Tel Aviv neighborhood. A map is provided at the beginning, showing Florentin, Rothschild Boulevard, Neve Sha'anan, Dizengoff Center, and the other locations where the stories take place.

The collection opens with "Sleeping Mask" by Gadi Taub, author of the novel Allenby Street, which was made into a popular Israeli television show. At age 49, Taub is the oldest of the 14 authors who contributed an original story specifically for the book. "Sleeping Mask" tells of a woman who descends into prostitution to pay off her father's gambling debts, and of the older man who falls in love with her.

While most of the book's 14 stories were originally written in Hebrew , one of the exceptions is "Swirl", by Norwegian journalist Silje Bekeng. This story, written from the perspective of a foreign diplomat's wife, tells of the ex-pat life in a luxury apartment on Rothschild at a time when social protesters have set up camp on the boulevard below. Paranoia of someone spying on the woman's life and fruit bats flying through the summer skies make this tale exceptionally enjoyable.

Tel Aviv Noir was edited by two of Israel's most well-known literary voices. Etgar Keret, author of five story collections; three children's books; and three graphic novels; contributed "Allergies", about a couple who adopt a dog and ends up doing increasingly strange things to take care of the pet. Assaf Gavron, author of the recently published novel The Hilltop, wrote the concluding story - "Center", about a murder at a high tech start-up with offices at Dizengoff Center, and the amateur detectives who are hired to solve the crime. The goal of the anthology, according to its editors, was to introduce a younger generation of Israeli writers to English-speaking audiences.

“In spite of its outwardly warm and polite exterior, Tel Aviv has quite a bit to hide," Keret says in the introduction to the book.  Keret assures readers that "Tel Aviv is a lovely, safe city. Most of the time, for most of its inhabitants. But the stories in this collection describe what happens the rest of the time, to the rest of its inhabitants."

Noir fiction can be defined as literature dealing with victims, suspects and perpetrators. Gavron says the stories of this book are not classic noir, but rather detail a dark element in the city. "I think Tel Aviv deserves its status as an interesting city, with culture and literature and with noir as well as everywhere in the world," he said in an interview with the Jewish Book Council.

Tel Aviv Noir reveals a side of the city that most residents and visitors never see. Readers interested in exploring the dark side of Tel Aviv will be fascinated by these short pieces of noir literature.